Recently, smoking bans have come to the forefront of community association issues. In fact, many associations are adopting no-smoking policies. Some have even considered amending their governing documents to prohibit smoking and become a smoke-free community. 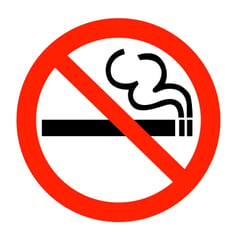 community associations for all the indoor common elements such as hallways, entryways and conference rooms. However, smoking in the outside common elements would remain permissible, unless prohibited in the governing documents.

As to prohibiting smoking inside of the privately owned units, Florida has not yet developed substantial case law on the subject. However, the Florida Supreme Court’s decision in the oft cited Woodside case stands for the proposition that the will of the associations’ members, through adoption of new restrictions, is not only permissible, but is judicially supported, too. So long as that holds true, the only question remaining is whether existing smokers would have a claim for being “grand-fathered.” Clearly, the board should discuss all of the pros and cons of creating a smoke-free community with the association’s lawyer.

In a 2009, Florida Division of Arbitration case, Belleair Palms Terrace Association v. Smalenberger, where a unit owner was alleged to have removed extensive portions of the common element drywall in his unit which facilitated the passage of cigarette smoke into adjoining units, the unit owner was ordered to restore all drywall in his unit and to cease smoking in the unit during the required installation of the drywall.

While County Court cases do not provide precedential value, they can at least provide some limited guidance. In one such Broward County Court Case, Merrill v. Bosser, the court found that excessive smoke gave rise to a claim for trespass.

In Massachusetts, where a resident brought a claim against their neighbor due to the noxious smoke, the court found that the second hand smoke was considered a breach of the “covenant of quiet enjoyment.”

Interestingly, as far back as 2006, a Colorado court ruled in favor of a no smoking amendment to a declaration of condominium. The court found that the passage of the amendment to the Declaration of Covenants, Conditions and Restrictions was proper, reasonable, made in good faith and not arbitrary and capricious. The plaintiffs who challenged the no-smoking ban were not able to establish that the newly adopted no-smoking amendment violated public policy or otherwise abrogated a constitutional right.

What type of smoking bans does your community association have in place? Let us know in the comment section below.

Vacation Rentals - What can you do to maintain your association's right to restrict short-term rentals?

Violation Remedies: Self Help vs. Injunction

Rembaum's Association Roundup Imagine this scenario: you are on the board of directors of your association. The association ...
Start Reading
Ashley Dietz Gray, VP Marketing Nov 18, 2019 < 1 min read

Making Your Condo Smoke Free: A Guide for Florida Condominiums

Has your condo association considered going smoke free? Smoke free policies are a growing trend as more and more residents are ...
Start Reading